Discover the Carnival Spirit of Majorca

Another big party weekend is about to hit Majorca. The Balearic Islands are synonymous with throwing the best parties, although usually in the summer when the sun is gleaming off the Mediterranean waters. As the Winter is coming to an end, the almond trees begin to blossom across the island in what is a beautiful display of nature, temperatures are rising and the days are slowly getting longer, a big three day fiesta is on the horizon. A fiesta that makes the countdown to Easter, hasn’t the year gone so quickly! So grab your shoes and the most colourful thing in your wardrobe and hit the streets!

When we think of Carnival, the first that springs to mind is perhaps the one in Rio de Janeiro or the more traditional masks of Venice. Well Spain also has a long-lasting tradition of throwing incredible parties throughout the Carnival weekend, with some of the biggest in the world taking place in Santa Cruz de Tenerife, Cadiz or Sitges to name a few. The festivities usually take place the last weekend before Lent, which in 2019 falls on Wednesday 6th March.

Whilst the parties in Majorca may not reach the scale set by the carnivals in the most popular areas, the island celebrates in its own unique way.

Discover the true essence of Majorca with one of the most cultural parties of the year.

Sa Rua is the most important part of the carnival in Majorca. This is the parade for adults featuring all the usual aspects of a carnival parade with costumes floats, musicians, dancing and singing as well as food and drink. The people of the island take to the streets in groups with a particular theme and a lot of colour, with a prize being awarded to the most creative teams.

The idea of carnival is to make an inclusive event for everyone to take part. That is why there is also a second parade called Sa Rueta which allows children to adorn the streets in their best costumes in a more jovial atmosphere. 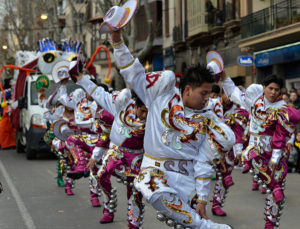 Carnival takes place at most cities and towns around the island but of course the biggest and loudest can be found in the island’s capital of Palma. This year the main parade is occurring on the Saturday 2nd March, whilst the festivities finish with Sa Rueta which takes place on Sunday 3rd. Slightly closer to our Gran Isla hotels in Santa Ponsa and Palmanova, the Calviá carnival will also take to the streets on Saturday 2rd March. Explore the smaller towns and discover the unique atmosphere which encompasses each version of the festival.

This year the weekend represents something extra special for these Mediterranean Islands. Friday 1st March is also the day of the Balearic Islands, a regional bank holiday in Majorca, which transforms the parties into a 3-day extravaganza.

The holidays come after the Statute of Autonomy was signed on this day in 1983, leaving the Balearic Islands with more control over numerous aspects of their own community. And ever since the Mallorquin people have grasped the opportunity to party with two hands.

There’s always a party for everyone in Majorca. Whatever the time of year there’s something occurring. And with the Easter holidays approaching, why not take the family on a getaway to the Mediterranean. Explore an island full of beautiful landscapes and cultural secrets. Our Gran Isla hotels open their doors again in April so that you can make a trip to Santa Ponsa or an escape to Palmanova, including our Tropico Playa Hotel which is offering a fantastic all-inclusive break from just £36 a night.

Get a little closer to the fiesta with Gran Isla hotels. 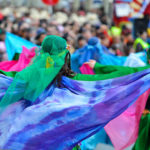 Discover the Carnival Spirit of Majorca