Whilst the summer is behind us, there’s still so many things to look forward to here in Majorca. Halloween is just over a month away, the dimonis are polishing their masks for the upcoming Sant Antoni and Sant Sebastiá festivals and of course right now we are witnessing the prestigious Oktoberfest parties. The biggest celebration of German cuisine of the year is renowned around the world for its outfits, steins, music, pretzels and sausages and Majorca is not one to miss out on a party like this! 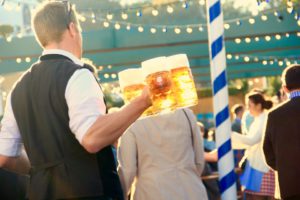 You may be wondering, “what has Oktoberfest got to do with Majorca?” Which would be a fair question. The origins of Oktoberfest stem back a few hundred years to the state of Bavaria, so why would the people be celebrating on this beautiful Mediterranean island over 1000 miles away. Well the truth is that Majorca has embraced all the cultures that have reached its shores, ever since the Moorish influences from the 14th century. Approximately 43% of the people travelling to Majorca derive from Germany, which is the highest percentage of any nationality and glimpses of their culture can be seen in various destinations around the island. And the aim of this event on the island is to bring together a plethora of international people to enjoy themselves and immerse themselves in a new way of living.

Whilst there used to be a cracking Oktoberfest in Santa Ponsa in years gone by, nowadays you unfortunately have to head further afield to join in the fun. But that opens up a wide spectrum of possibilities where you can discover new parts of the island whilst enjoying the best that this springtime festival has to offer. Why not take the family on a day trip to Palma and beyond? 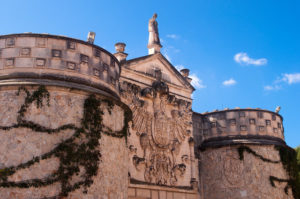 Pueblo Español is a delightful outdoor museum showcasing the traditional architecture of Spain.

In the island’s capital, you can find the 9th edition of the popular Oktoberfest at Pueblo Español. The event started on the 20th September and continues through the 6th October. This traditional beer festival doubles up as one of the biggest food events in Majorca during September and October with a wealth of German and Spanish cuisine. There is also a range of different beers including those from Munich, as well as traditional live music and a setting designed to replicate the authentic Bavarian parties. But what really sets Pueblo Español apart from other Oktoberfest destinations its location. It’s not your typical German Bierkeller because the “Spanish Town” as you can call it in English, is actually an open air museum which combines the main characteristics of traditional Spanish towns and combines a number of cultural monuments from around the Peninsula. 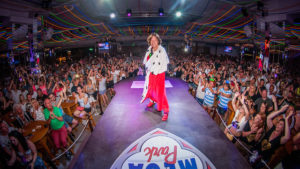 Discover an array of live music, parties and German cuisine in the Playa de Palma area of Majorca.

If you are seeking an even livelier German experience this Oktoberfest, there is another option for you. The area of S’Arenal, which can be found just the other side of Palma, is one of the biggest German party scenes on the planet! The popular party destination, affectionately known by the German population as Ballermann, provides a wealth of live music, a festival atmosphere and classic German cuisine. Majorca’s most popular bierkellers Megapark and Bierkönig can be found a few metres from the pretty shores of Playa de Palma.

There’s plenty of fun to be had on your family holiday to Majorca. Whilst in Santa Ponsa and Palmanova, the home of our Gran Isla Hotels, you can find a myriad of activities for all ages, this Mediterranean island has so much to offer with its parties, culture, history and stunning natural landscape. 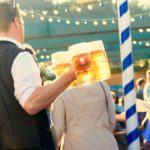